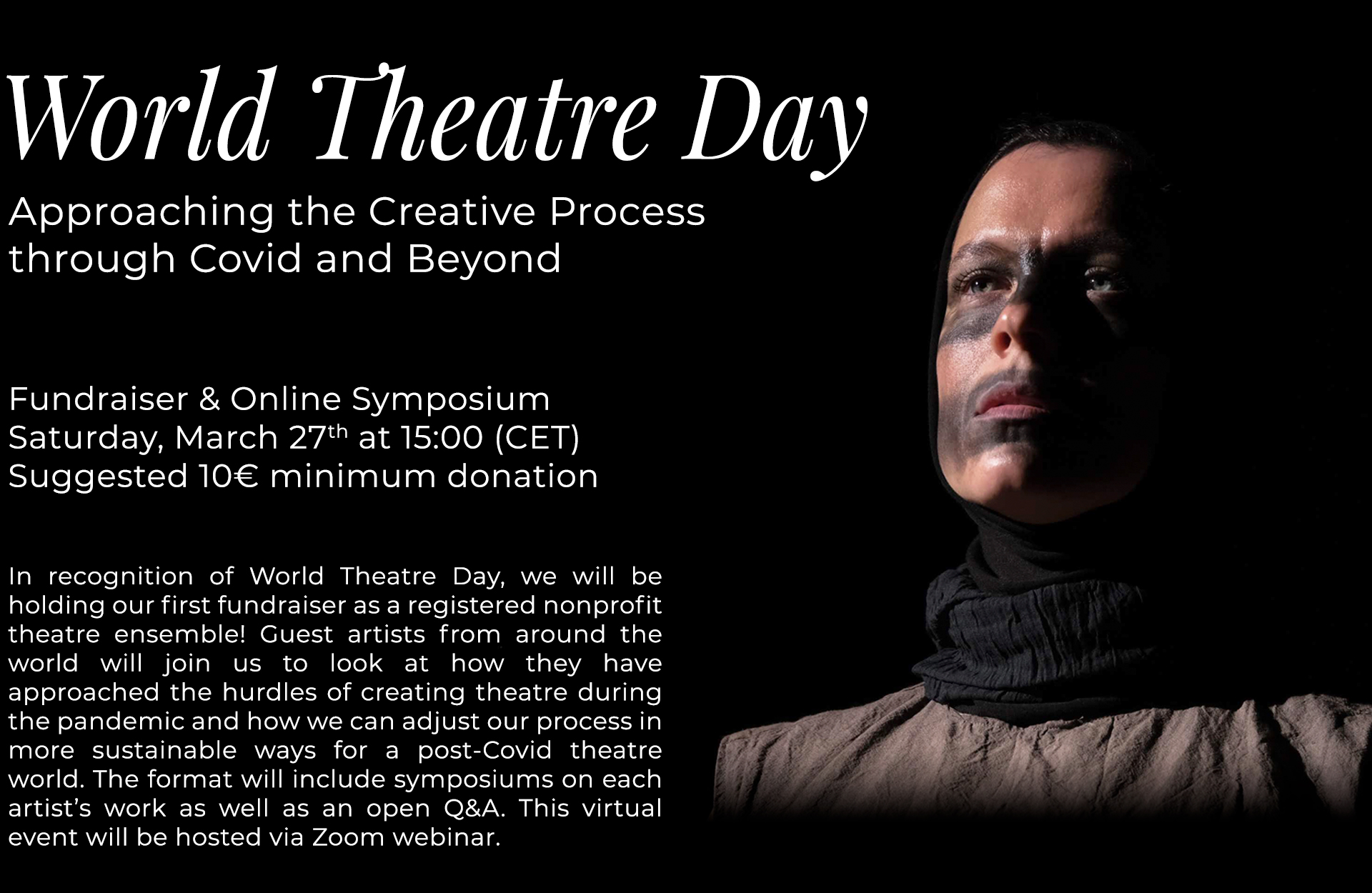 Each speaker’s session will be approximately 45 minutes long and while each session may have a slightly different format, all will be moderated and include a short Q&A at the end. We will end the afternoon with a round table discussion with all the guest speakers.

Embracing the conversations about diversity in theatre

What are some changes that we can make to actively embrace and address diversity within the theatre community and on our stages? Kristy Thomas, diversity trainer and educator, will share a discussion with some of her past graduates and theatre professionals about actionable points we can use to help create a more inclusive theatre working environment, while also being sensitive to representation on the stage. She will be joined by Cedric Hayman and Ashley Rountree for her discussion.

Intimacy Choreographer Brooke M. Haney and Fight Director Shad Ramsey discuss the ways we simulate intimacy and violence on stage in the past, during COVID, and beyond. We'll take a look at the history of both the Fight and Intimacy Directing movements, and how they are intertwined. While COVID has certainly imposed challenges in both fields, bringing them to a halt for months, it has also allowed the opportunity for thoughtful education and growth, and presented creative challenges. We'll discuss those challenges and opportunities and how they will inform work in the future. This discussion will be followed by a Q&A, so come armed (pun intended) with your questions.

Learn more about Shad and Brooke.

Insulted. Belarus, a play by Belarusian playwright Andrei Kureichik, has become a global theatre phenomenon. Inspired by the revolution that followed a corrupt, stolen presidential election in Belarus in August 2020, it gave rise to an unprecedented endeavour titled the Worldwide Readings Project. As of mid-February 2021, after five months of work, the WRP had organized over 150 events throughout the globe, including 115 readings in 28 countries in 20 languages. All of this naturally took part during a pandemic. John Freedman, the organizer of WRP, will share his experience with the ongoing process and will discuss future possibilities for the project once the pandemic subsides. A Q&A will be included.

An actor’s perspective on changes to the audition process during quarantine, forecasting the lasting changes, and tools and techniques needed to successfully adapt. 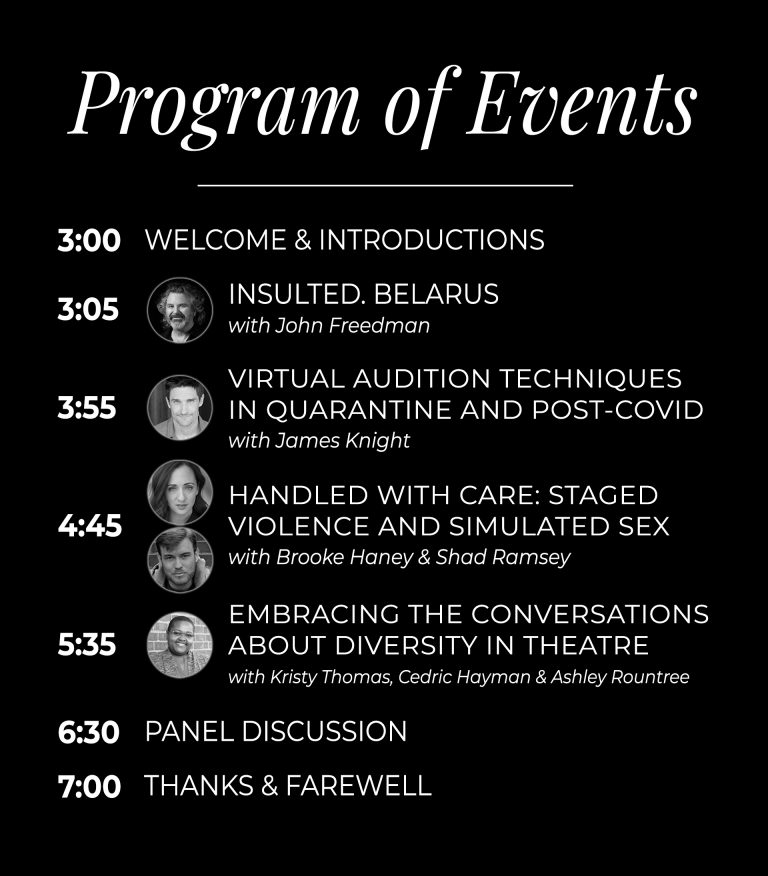 Kristy Thomas was born and raised in Kansas City, MO, and has been a lifelong educator in theatre and speech communications. She is committed to strengthening communication and relationship building on topics dealing with diversity in education and other organizations. She also believes that empowering educators to lead discussions in their diverse communities is key to continued educational success. A part of this is the ability to create inclusive work environments for all so that organizations can not only build stronger, but smarter in all aspects. Kristy aims to address the stigma associated with diversity, equity and inclusion with the ultimate goal of fostering dialogue and encouraging action. Kristy has worked with educational institutions, non-for-profit organizations and boards, created videos to address school districts’ work toward creating equality for all, workshops with teen leadership groups, executive counsels, human resource and recruiting officers, and hopes to continue expanding her reach to other groups in need of her services. She holds a certificate in Diversity & Inclusion from Cornell University, an MBA in Educational Leadership w/ Principal Certification, an MFA in Acting & Directing, and a BS in Secondary Theatre and Speech Education. Kristy proudly operates Always Writing 4 U–a writing and publishing business–in addition to Thomas DEI Consulting LLC.
Link Link Twitter Linkedin Instagram

Shad Ramsey is a Louisville based Actor, Fight Director, Flying Director, and ETCP Certified Rigger. He is an active member of both the Actors Equity Association and the Stage Directors and Choreographers Society. He holds a Bachelor of Science degree in Theatre and a Master of Fine Arts degree in Acting and Directing. He has worked extensively as an Actor, Fight Director, Flying Director, and a Teacher for over 20 years in the regional United States, Internationally, and on the Broadway Stage and at the Metropolitan Opera in NYC. Credits include:
Broadway– Memphis the Musical, Macbeth, Bonnie & Clyde, Doctor Zhivago.
Off Broadway– Henry V, Hamlet, King Lear, Cymbeline, The Rover, Richard III, Romeo & Juliet, As You Like It.
Regional Theatre– The Hunchback of Notre Dame, A Comedy of Tenors, The Barber of Seville, The Marriage of Figaro, The Three Musketeers, The Miracle Worker, Peter Pan, Tarzan, Mary Poppins, The Wizard of Oz, Billy Elliot, The Little Mermaid, Aladdin, Ruined.
Metropolitan Opera– Faust, Boris Godunov, Cesare, Rodelinda, Iphegene en Tauride, Prince Igor, Two Boys.
Julliard– Don Giovanni, Cosi Fan Tutti, Cunning Little Vixen.
Link Linkedin Facebook

Brooke M. Haney -they/she- is a New York based Actor and Intimacy Choreographer who has worked regionally in the states and internationally in the Philippines and Switzerland. Creating consent based rehearsal rooms and training artists who are empowered to advocate for themselves is at the center of their teaching and art making practice. Haney is the resident intimacy director for Barefoot Shakespeare Theater in NYC, and has worked as an Intimacy Choreographer/Consultant for Marymount Manhattan College, Vassar College, the International School of Zug and Lucerne, Company of Fools, Turn to Flesh Productions, Hamlet isn’t Dead, Scawwy Hawwow Theatre, with director Daphnie Sicre, and on the film Perhaps. As an intimacy choreographer, Brooke specializes in queer stories and kink. Brooke is a member of the acting company of Only Make Believe. They graduated from the University of Central Florida with their MFA in Performance and has their BA in Theater Arts from the University of Washington. Proud member of AEA and SAG-AFTRA.
Link Instagram Link

John Freedman has written and/or edited ten books about Russian theater, and has translated some 90 Russian plays into English. He was the theater critic of The Moscow Times from 1992 to 2015, and has been the Supervisor for English at Moscow’s Stanislavsky Electrotheatre since 2015, working remotely from Crete, Greece, since late 2018. His play Dancing, Not Dead won the Internationalists’ Global Playwright Contest in 2011, and his short play Five Funny Tales from Buenos Aires (2013) was performed over 100 times in New York, Edinburgh and Chattanooga Tennessee. He organized the Worldwide Readings Project of Andrei Kureichik’s play Insulted. Belarus, in Sept. 2020, turning the play into an international phenomenon that, by February 2021, had been given 115 staged readings in 28 countries in 20 languages.
Twitter WordPress Link

For over 20 years, James Knight (SAG-AFTRA, AEA) has worked in a variety of entertainment disciplines including: theater, film, tv, commercials, industrials, and voice over work. He currently resides outside of Chicago where he helps to run a 750 seat performing arts center. He holds a degree in theater performance from Western Michigan University and an MFA in Acting and Directing from the University of Missouri-Kansas City.
Link

There is a suggested 10€ minimum donation to attend this event. Larger donations are of course, welcome and most appreciated! Donations can be made via PayPal or bank transfer.

To register for this event, please send an email to tickets@shakespearefrankfurt.de with your name and confirmation of your donation payment. You will then receive a reply with an individual Zoom link for the event.*

For questions regarding your donation, please contact Varvara Pomoni.

For general questions regarding the event, contact us at tickets@shakespearefrankfurt.de.

*This event will be hosted via Zoom webinar. Please be sure you meet the technical requirements as indicated by Zoom before the event.

We would love to have you join us for this event! Please send proof of student status to tickets@shakespearefrankfurt.de and we will provide you with a link to the event free of charge.

Don’t miss out on events, news and production updates! Sign up for our newsletter and stay up to date on all of  Shakespeare Frankfurt’s activities.

By signing up for our newsletter, you are agreeing to receive periodic updates from Shakespeare Frankfurt e.V. Your information will be securely stored and never shared and we promise to never send spam. We value and respect your privacy.